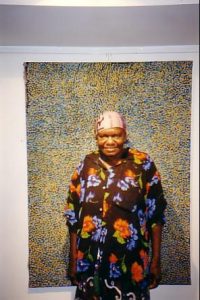 Gladys c 1937 shares stories with her sister Ally (Ollie Kemarre , deceased, (c.1935 – c2007) that they both inherited from their grandmother, Emily Kngwarreye. Their main Dreamings are based on native plants and bush tucker species as well as design elements associated with women’s Awelye (ceremony/dancing).

Gladys’s paintings of her desert homelands reflect her intimate knowledge of the area where she was born and raised.

Anmatjerre Lands depicts an aerial view of the desert around Kurrajong Outstation at Utopia where she lives. Kurrajong is located approximately 270 km northeast of Alice Springs.

This area is characterised by dense Spinifex grass country and varieties of native bush foods and flowers that grow in the desert.
Paintings depict the movement of the Desert sands, the dense Spinifex grasses, different flowers and native foods growing in region coming to life and regenerating after the annual desert rains
The Anmatjerre women have great knowledge of ancient tracks through the bush and Spinifex grasses that are used to navigate the land and locate important bush foods such as Alkwe (Bush Plum), Kudjera (Bush Tomato) and Bush Raisin. The tucker species are shown in various stages of growth and ripeness.

This work is a central example of Gladys’s use of pictorial space to evoke a sense of the vast dimension of her desert country. Her works are sought after for their ephemeral and organic dot-work. Anmatjerre Lands show-cases the artists’ intuitive use of colour, intricate rhythmic patterning of marks, and demonstrates her deep connection to her desert country.

Artistically, Gladys Kemarre is one of the most important women on Utopia Station. She began painting in the late 1980s with the first women’s Batik Project for the Robert Holmes à Court Collection. Works are sought after for their unique layering of dots which creates the sense of a three dimensional image.

FREE DELIVERY WORLD WIDE (ARTWORKS OVER $250) AND A 14 DAY MONEY BACK GUARANTEE.

Our Collection
Our Artists

Original & Authentic Aboriginal Art is a member of the City of Melbourne’s Indigenous Code of conduct that ensures the ethical treatment of artists and ensures the authenticity and provenance of the paintings.